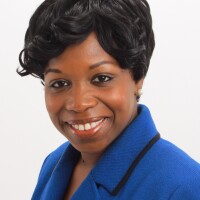 Kimberly N. Ellison-Taylor has a diverse background in finance and technology; she is currently executive director of finance thought leadership at Oracle. She has held positions at NASA’s Goddard Space Flight Center, Motorola, KPMG and in Prince George’s County (Maryland) government. From 2016 to 2018, Ellison-Taylor served as the 104th chairman of the American Institute of CPAs (AICPA), where she received numerous awards and recognition. Notably, she was the youngest person, fifth woman, and first person of color to serve as chairman in the AICPA’s 130-year history. Ellison-Taylor was the second chairman for the Association of International Certified Professional Accountants, the global organization formed by members of the AICPA and the Chartered Institute of Management Accountants (CIMA) in 2017 that has 667,000 members in 184 countries and territories. She has been recognized by Accounting Today as one of the “Top People in Public Accounting—2018.”